IAHD was founded in 1993 and consists of both people with and with no disabilities who all strive to achieve the goals set by IAHD.  The best way to do this is by letting people experience that they can also dive with a disability.

The International Association for Handicapped Divers (IAHD) was formed in 1993 in Sweden by Maurice Parry, with a primary goal, to teach dive instructors how to train and supervise physically disabled divers. Certified instructors from any renowned dive organization can follow IAHD courses and this was one of the main reasons why interest in IAHD courses soon spread beyond the borders of Sweden.

In 2000, the Dutchman Klaas Brouwer took control of the IAHD and it was under his leadership that IAHD expanded to many countries around the world. This rapid growth presented new problems, particularly in logistics and management and in particular, unfortunately control over the registration and certification of trainees and instructors was partly lost.

To help address these issues, in 2007 Klaas Brouwer contacted the World Organisation of Scuba Diving (WOSD), an international dive organization that had already implemented IAHD courses in its own training system. Brouwer knew that WOSD had developed a registration and certification system that would solve IAHD's problems. WOSD agreed to modify this system so that it could also be used by IAHD.

Later, Klaas Brouwer wanted to take a step-back and decided to hand over full control of the IAHD to the World Organisation of Scuba Diving (WOSD). Since 1st January 2010, the IAHD is an independently operated, non-profit subsidiary of the World Organisation of Scuba Diving (WOSD). Under the leadership of Gerard Oijnhausen and Fred Siebers the image and structure of the IAHD was completely renewed and modernised. In addition to expanding and modernizing the existing course material, the courses were updated to allow training of people with mental disabilities. The management structure between the Head Office and those in the field was also changed in order to achieve faster and more direct communication lines.

The organisation is comprised of both able-bodied and disabled people who all strive to achieve the goals set by IAHD. Experience has shown that the most effective approach is to encourage those with a disability to try diving, so that they can experience how accessible diving is for them. There are very few disabilities which actually prevent one from diving. However, the type of disability varies from person to person as does the way in which one can cope with that disability. 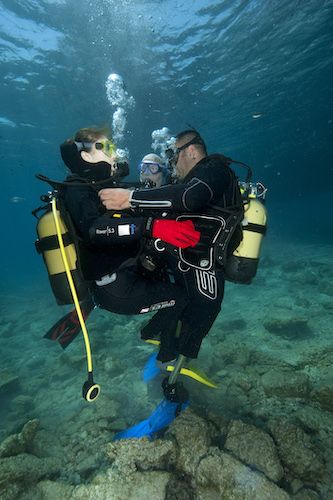 With over 25 years' experience in recreational diving you've come to the right place for the complete diving experience.

Anyone can learn scuba diving with us. Young or old, able-bodied or with physical or mental disabilities, you are welcome.